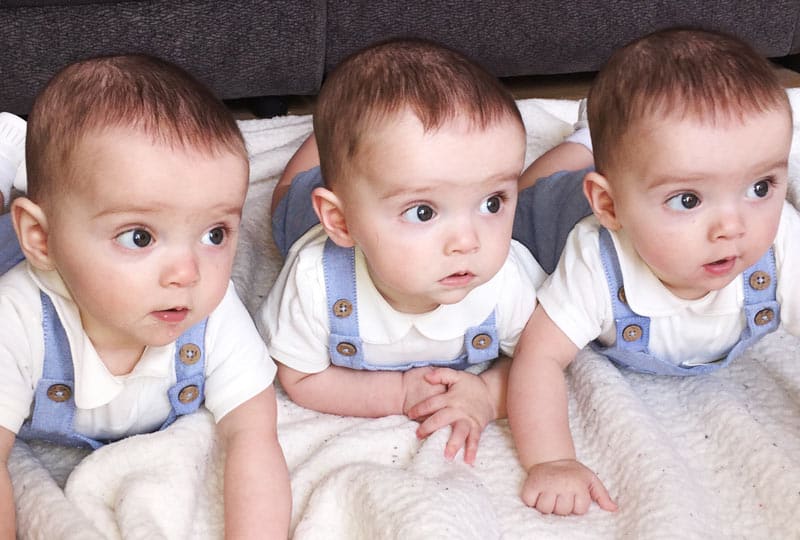 NEWCASTLE, UK. NorthGene, who partner with The Multiple Births Foundation for twin/triplet zygosity testing, was delighted to advise new mother of triplets, Becki-Jo Allen, that her three children were genetically identical. The likelihood of triplets is in the astonishing order of 200 million to one as identical triplets occur when the fertilised egg splits not once, as in the case of twins, but twice during the early days of a pregnancy and is particularly rare in natural conceptions.

Becki-Jo says “When my sons were newly born the doctors said they were non-identical but so many friends and family said otherwise. After speaking to The Multiple Births Foundation they recommended twin/triplet zygosity testing and to my surprise the results came back showing my boys were genetically identical!”

Chief Medical Officer Professor Sir John Burn commented “Approximately 1 in 67 pregnancies result in multiple children, the majority of which are twins. When you then consider that naturally conceived triplets are less common and genetically identical triplets significantly less so, this is a truly miraculous observation that our laboratory has been privileged to witness”.

NorthGene recently partnered with The Multiple Births Foundation, based in Queen Charlotte’s & Chelsea Hospital, London. The charity provides support and assistance to families expecting or containing multiple children from the same pregnancy. The Multiple Births Foundation advocate DNA testing to determine whether children are identical in order to assist in the establishment of their own unique identities throughout development and for medical purposes.

Jane Denton CBE, Director of The Multiple Births Foundation stated “One of the greatest challenges for parents and the multiple birth children is establishing their own individual identity. The importance for parents and the twins, triplets (or more)  themselves of knowing for sure whether they are  genetically identical (monozygotic) is greatly underestimated. Educating health professionals and others concerned with their care about giving accurate information is a fundamental part of our work at the Multiple Births Foundation. We are delighted to be working with NorthGene to provide this service”.

As a quality assured, UKAS accredited DNA testing laboratory, NorthGene is in an excellent position to provide DNA testing to establish whether children are identical or not and have offered the service for over 20 years. Chief executive, Elaine Warburton OBE said “NorthGene is delighted to be partnering The Multiple Births Foundation and undertaking zygosity testing cases. We recognise the importance of testing of this kind and are impressed with the wonderful services that The Multiple Births Foundation are supplying to families”.

About NorthGene Ltd
NorthGene Ltd is a DNA testing company specialising in Human Identification & Relationship testing for both legal and non-legal purposes. The company was founded in 1994 by Professor Sir John Burn and his associates, and predominantly worked out of NHS and Newcastle University laboratories. The company was acquired by QuantuMDx Group Ltd in 2012 and NorthGene was granted BS EN ISO17025:2005 accreditation in 2013. It now has dedicated laboratory facilities.Following this accreditation NorthGene has continued to grow organically, increasing its range of tests as well as entering subcontracting agreements with a number of market stakeholders. NorthGene also provide Drug & Alcohol Testing services, for which it subcontracts the laboratory work.

About The Multiple Births Foundation
The Multiple Births Foundation is a charity dedicated to helping families with twins, triplets or more, through information, advice and support in addition to providing education and training for healthcare and allied professionals about how to meet their special needs. Founded in 1988 by Elizabeth Bryan, a Consultant Paediatrician, has become a national and international authority on multiple births.

Is this test right for you?

✓ Potential fathers are cousins or brothers – Include in Additional Information

✓ Potential fathers are father and son – Include in Additional Information